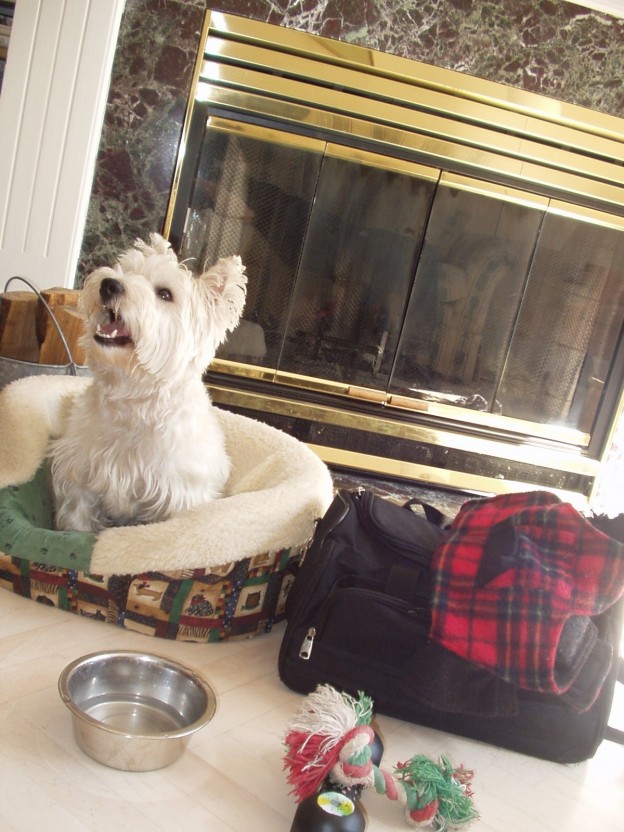 Usually when I head out of town for a weekend, I leave my three-year-old West Highland terrier Goodweather or Goody with my friend Moira. For the whole weekend, Goody cavorts on Moira’s good couches, sleeps on her puffy duvet and I wouldn’t be surprised to hear she cooks him pancakes. But recently when I took my children out to visit their uncles in Vancouver for a week, Moira announced she was going to be away, and I would have to find somewhere for Goody to stay.

Several years ago, before Moira started taking Goody, I had checked out a pen in Toronto and while they were very business like, well priced and clean, Goody would have spent an awful lot of time in a big cage. He only would have been allowed out for an hour a day to run, and he never would have met any other dogs. Fortunately at that time, I discovered a woman who took in dogs. When I arrived at her place and looked around, she shrugged, “ I let them sleep on the furniture,” which I looked pretty well worn and was covered in an assortment of old blankets and quilts. In the backyard stood a dachshund – in a tiny swimming pool. The place had clearly ‘gone to the dogs’ and I knew it would be a great place for Goody. But when I tried phoning her this summer, I discovered she wasn’t taking dogs anymore and I was forced to start from scratch to find a place for Goody.

I started checking out ads in magazines and on the internet. Some places boarded dogs, while others would visit your house, or you could even have a human stay but I figured that if we were going off to have a good time, then Goody should be going to his own little camp.

When I called the first place, the woman sounded nice on the phone and seemed to love dogs. It was a little pricey but they could pick up and drop off Goody. I wanted to come to her place before and meet her and the other dogs staying there, but it seemed that only nighttime visits were an option, which I found difficult to make. When I mentioned various times in the day, she seemed uncomfortable and then I realized why. Likely no one was home in the daytime. What if the other dogs ganged up on Goody? What if Goody ganged up on the other dogs? It didn’t seem right to leave them alone all day.

A friend had told me of a lovely woman who worked at a vets who took dogs into her house, but she had a six-year-old daughter. When I heard that I froze. Even though the woman was comfortable with Goody, you can never be one hundred per cent sure with dogs and kids. As well, Goody has had his problems in the past (When Goody was Baddy, Spring 2005) and while he seems cured of his aggression, I didn’t want to take a chance.

It was at that point when googling around that I discovered the Lonesome Kitty and Diggity Dog Spa and Hotel. My heart started beating faster as soon as I saw the name. And as I searched the website, I had one of those moments where you know you’ve found what you’re looking for. In addition to having the cutest pictures of dogs who had stayed there, (ten dogs posed in a group to look at the camera, three of them westies) there was a list of things that guests at the Diggity Dog Hotel were treated to. I’ll give you an idea. The day started off with a walk through High Park, followed by breakfast. Then there was relaxation time, followed by playtime, water play in the wading pool, ball playing and bone chewing. Then there was massage time – full body and foot massage and ear scratching. Well, that was it for me. They had me at ear scratching.  I quickly phoned them and prayed they would have room, which they did.

When Goody and I arrived, with his bed, dog dishes, snacks and toys on hand, one of the guests from the Lonesome Kitty Hotel upstairs sat and glared at him, (I gather they don’t get together socially) even though Goody attempted to get to know it better. We were then ushered into the Diggity Dog Hotel and as I saw the various dog beds and blankets around the living room I knew Goody would be happy here. When we walked through the kitchen to the back yard, there was actually a woman there playing with the dogs. I guess she was a counselor or ‘dog care’ worker. I felt good when I left but still missed Goody, kind of the same feeling I had years before when I had first dropped my daughter off at day care. It was then that I realized how much looking for Goody’s camp had been like finding day care and that I had been going through a similar interviewing process. I felt a little silly.

That was until I met a couple while I was on holidays and they told me about their experience. They had actually taken their dog over to the place where he was going to stay, not once, but twice, an hour initially and then for a night, just to make sure he would be comfortable there. They explained he was a rescued dog though, and that was why they’d done this. I nodded but secretly prided myself in the fact that I was not such an overprotective dog mother. Even though at that moment I had a pang of, I hope Goody is okay, it was followed quickly by thoughts of the ear scratching and bone chewing.

Moira was back for the Labour Day weekend, when I was taking my daughter to university and took Goody and they seemed happy to be reunited. But I worry about one thing – was there ear scratching? And if not is it something I should be expecting when I am looking at doggy daycare or camp providers in the future?