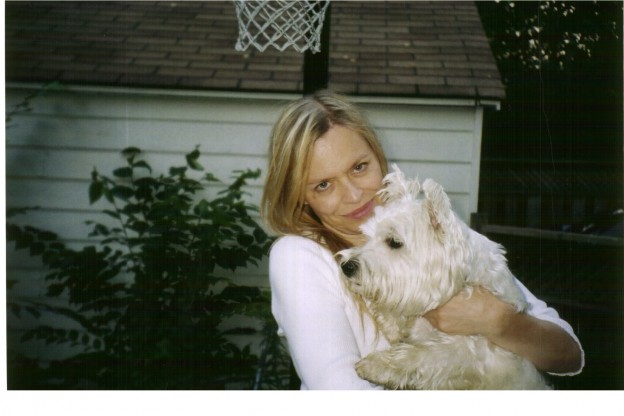 Several weeks ago I had to go out of town on business, and a friend of mine offered to come to stay with my West Highland terrier Goody. She had recently returned to the country and was dogless, so she needed a fix and staying with Goody would provide it. I didn’t want to put Goody in a kennel for the weekend so I was ecstatic when she made the suggestion.

Things started to unravel though when she picked me up at the bus station on Sunday. As we drove home, she smiled, “I let Goody sleep with me last night. I hope you don’t mind.” My eyes widened. I didn’t really care if Goody was up on the bed, but I felt that him actually sleeping with someone else, someone he knew so fleetingly was a bit of a surprise. I mean, it was a little bit intimate, right?

When I arrived home, my daughter who had come back earlier that day said, “You should have seen Goody and Leslie* (my friend has asked that I not use her real name) They were like best friends, and Goody even slept right up on the pillow last night.”

Okay, wait a minute – Goody slept on the pillow? I mean it had taken Goody months to work his way up on to my pillow, and he was sleeping on the pillow with Leslie on the first night? Whose idea was this anyway? Leslie? Goody’s? I could ask Leslie, but there was no way to confirm with Goody because he can’t (or won’t – you know males) talk. Leslie was so carefree about it, didn’t seem to be feeling guilty about it. What if I had been married and asked her to water my plants for the weekend? Would I have heard something like, “ Oh I slept with your husband, I hope you don’t mind?”

You see the whole sleeping with Goody thing had evolved for me after we had known each other for nearly a year. One week the kids were away and Goody was feeling lonely spread out on one of the couches downstairs. So at about four in the morning, he started doing his wolf howl. I bounded downstairs, let him out to go to the bathroom. When I let him back in, he raced by me and scampered up the stairs and headed right into my bedroom, jumping up on the bed. I thought it was so cute, that I let him stay. ( I have to admit I felt a bit soft on the whole thing, because I have never let my kids sleep with me, but they toss and turn) Night after night, Goody did the yowl, followed by rush for the bed. After a week, I got wise and simply put him up on my bed.

It was idyllic at first. He is so small, he made no indentation on the bed, never tried to push me out, and didn’t snore. I would kiss him goodnight and never heard a peep out of him. He always stayed down in his corner of the bed. In the morning I would wake up and often he was lying on his back, feet in the air, snoozing.

After awhile though, it started to feel unnatural. Whenever I woke up Goody was watching me. And because we were sharing that sleeping time together we were becoming closer. In the daytime, Goody followed me everywhere and always wanted to cuddle. One night though I felt things were getting too close. I woke up, and felt like someone was watching me. I turned my head to the left. There beside me on the pillow, was a white fur face, looking back at me. Yikes!

Now that Goody had made his way up to the pillow, he wanted to stay there. One night I awoke to Goody actually attempting to lie down above my pillow, which technically put him on top of my head. It felt like I was wearing the equivalent of a Westie hat. I moved him. Finally, one night, as I was pulling the covers over me, he growled at me. That was it. We were turning into an old married couple, and because Goody’s teeth were sharper than mine, there was only one place for him. Back on the couch.

Goody was puzzled at first. I would kiss him goodnight, then close my bedroom door. He would sit outside the door, but finally and sadly make his way downstairs.

I felt badly but I also felt Goody and I needed some distance.

Maybe that was why when Leslie offered him a spot on the pillow, he was more than willing to accept. Maybe he was simply lonely, and not really cheating on me. He had gotten used to that kind of intimacy and wanted it again.

I am already planning to have Leslie back, so the inevitable will happen even if no one admits it. I actually have questioned Goody about whether it could happen again and he simply looks back at me.

Maybe I just need to learn to share Goody with other women. Perhaps I have to work through my jealously issues and realize that I will always be his dogmother and he will love me the most, whether or not we are sharing a pillow.

Or maybe I just need a human boyfriend.