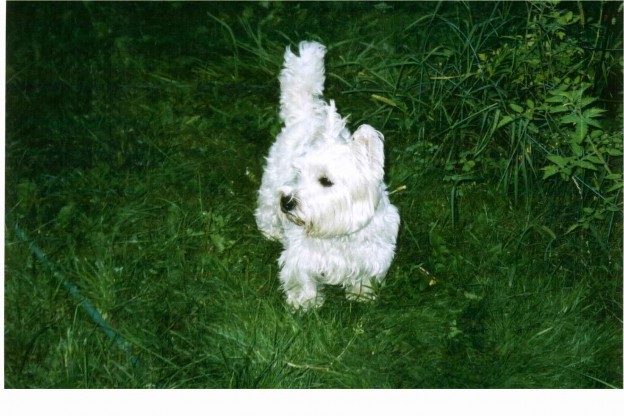 When I was a young girl, our family had a Standard grey poodle called Julie. Our backyard was full of squirrels and Julie spent a good deal of time chasing them, but she never succeeded in catching one. My mother maintains Julie could have snagged one, but whenever it appeared she was closing in, she would always slow down just enough to give the squirrel time to scamper up a tree.

That’s why I’ve never worried about sending Goody (Goodweather, for short), our nearly three year old West Highland Terrier, outside to perform his self appointed mission of ridding the yard of squirrels, no matter how close they are to the back door.  Even if they are bouncing around the flower pots, by the time Goody alerts me through a series of short, sharp barks of trouble in the back yard and I race to the door to slide it open, the squirrels are long gone.

Over the years, so involved in Goody’s Squirrel Patrol have I become, that I have transformed, much to the humiliation of my children (get a life Mom!) into somewhat of a squirrel ‘early warning system’. I find increasingly that as soon as I spot a squirrel in the backyard, I alert Goody in a very low voice, with something as subtle as ‘Goody…there’s a …’ and Goody knows right away just what I mean. I wrench open the door and off goes Goody in hot pursuit.

So when I alerted Goody to a squirrel in the backyard over the Easter weekend, who knew that the calm of a sunny afternoon was soon going to turn into the script of a squirrel horror movie. My children were just leaving the house to visit their grandparents for dinner with their Dad (I have full custody of Goody, but that’s another story) and I saw a squirrel. I waved the kids goodbye at the front door, then ran to the back door to let Goody out to chase a squirrel I had spotted sitting (likely digging up tulip bulbs) on the right side of the garden. As I waited for the squirrel to figure out Goody was bearing down on him and zip off as usual, I realized in horror nothing was happening. I don’t know if the squirrel had fallen asleep or was just out of it, but within two seconds, which seemed like a lot longer, Goody arrived at the squirrel. I swear he even put on the brakes just like my dog Julie, but even then he got to the squirrel before it even started moving. And darned if it was so surprised that it didn’t have the presence of mind to run up a tree or at least away. Goody, amazed with his good fortune, grabbed the squirrel in his mouth. Unfamiliar with what to do next, he dropped the squirrel, which ran a few steps, then Goody grabbed him with his teeth again. It was like a little dance, the squirrel would run, Goody would catch it, then Goody would drop it. Repeated. Many times.

Horrified and grossed out and with no good ideas of how to stop this, other than screaming, ‘Goody put the squirrel down!!” alternating with “Stop Goody Stop!” which he ignored, I ran out the front door hoping to catch my ex husband and convince him to save the squirrel. He was just heading down the street and I ran behind his car, waving my hands, and screaming in my loudest voice. His car continued on, seemingly oblivious (but you can never be too sure with ex-husbands) down the street and I cursed him loudly.

Running back into the house, and out into the yard, I spotted a shovel. I ran for Goody and the squirrel hoping to separate the two with the shovel. During one of those brief moments, when Goody dropped the squirrel, I shoved the shovel (must be where it gets its name) in between the two, hoping to give the squirrel time to escape. I can still remember it looking up at me desperately with its big dark eyes and I wondered if it was badly injured and I should be putting it out of its misery rather than trying to save it. But I just couldn’t. Instead I screamed, ‘Run- get away – go on!’ and the squirrel heeded me and high tailed it (now I know where that comes from) up the tree.

I apologized to Goody and explained the situation, trying to praise him so that his self esteem wouldn’t suffer, but at the same time trying to be a good dog mother and let him know it was wrong to eat squirrels. It took quite awhile to convince Goody we should go back inside. He wanted to stand at the bottom of the tree in hopes of an encore.

When we eventually did make it inside, things had changed. I was feeling very guilty about my bit in the whole thing and I was grossed out by the fact, Goody had just minutes before been holding a squirrel in his mouth. He seemed like such a, well…. an animal. I know he was just doing what came naturally, but Goody usually seems so human that it took me aback. He had blood on his mouth too, but I think the squirrel may have scratched him. Down to the bathroom we went, where I administered the most thorough bath of his life.

Still neither myself nor the kids felt like kissing or hugging him for a few days because of the potential germ factor and he was quite put out.  In his eyes he was a hero. After years of chasing intruders in the back yard, he had finally caught one. He had met with success and he was not receiving his proper due. Such is the life of a squirrel sentry.

Well, Goody and I have each learned something from this squirrel saga. Goody now knows that anything is possible if you really want it (and I am sure my poodle Julie is cheering Goody on from her place in doggie heaven). What I have learned from the whole thing is, never overestimate your opponent. In other words, my early warning duties will now include warning not just Goody but our backyard squirrels.