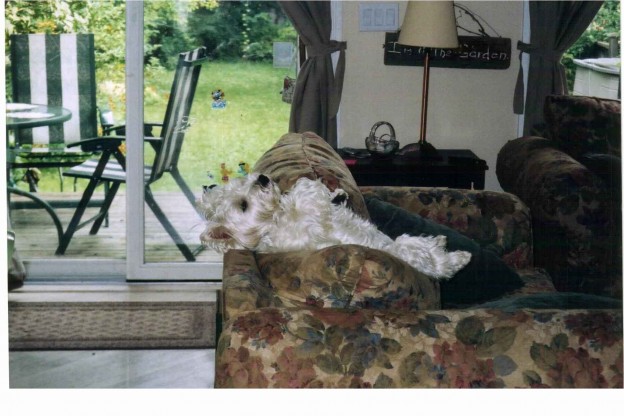 When Goody was Baddy

It was about a year ago today, a snowy day, so snowy in fact, school had been cancelled that I came to a terrible realization. I had arrived home from taking one kid to a doctor’s appointment to find our dog, Goody, a one and a half year old West Highland terrier growling at one of the neighborhood children. At issue, I figured was a muffin the kid was eating. However, it seemed that all morning Goody had been aggressive and fearful with the child. When my son unwisely tried to make things better by picking up Goody and putting the two face to face, Goody tried, but was not successful in biting the friend.

Immediately I separated the two, Goody assigned to the backyard, but my heart sank. Biting dogs and children do not mix. It wasn’t the first time that Goody had tried to use his teeth to settle disagreements. Several times when food had fallen to the floor and I had attempted to retrieve it, Goody managed to get both my fingers and the food into his mouth. We put it down to bad puppy judgment.

But that snowy day was different. I called the vet, who suggested a behavioral specialist. Until then, (and we had to wait several weeks) we had to ignore Goody –withdraw any love or attention from him. He wasn’t to have his toys or treats. I can’t begin to tell you how difficult this was. It forced us to actually start hugging each other (well brothers and sisters never hugged, but I was hugging everyone)

Then we contacted the behavioral specialist – okay he was doggie psychiatrist, let’s get it out in the open. We had to fill out a nine page questionnaire (I kid you not) about Goody’s problem(s)

When we arrived for our appointment, I wondered if Goody would end up on a couch and just how the doggie shrink was going to handle all of this. Would Goody be recounting tales of Mommy neglect, while I listened? Would he receive some kind of doggie Rorshach test? What followed actually was a two hour session in a fairly stark room with a bright light bulb – me on a chair, Goody on the floor, both of us listening as the psychiatrist talked about our problem.

When I entered the office, I was prepared for the worst – the worst being that the doctor would tell me the dog was unfixable and we would not be able to keep him. I asked the doctor point blank, “Is it irresponsible for me to keep this dog?” Fortunately he answered no. However, Goody was a purebred, male, terrier – a recipe for dominance. And at a year and a half Goody was in his teen years, which are not great for dogs either. But it was essential we change his behaviour now, before it stuck with him forever. The psychiatrist did in fact say that he felt that Goody could change, but we needed to use reward based training – that of course means ‘good doggie gets treats.’

Now I must tell you that it is difficult to convey everything the doctor told us, because as soon as we got home Goody chewed up the lower half of the diagnosis sheet, which was of course an impetus for me to get the trainer in.

We had referrals to several trainers who practiced reward based training and finally contacted a delightful woman who came, patted Goody, gave him treats and told us he was a wonderful dog. When I told her how at dog obedience classes (yes, we had enrolled in two sets, trying to be good parents) we were told to put Goody in his back and shout at him, to establish our dominance, she did a double take.

This in fact seemed to be the crux of the problem. By using an aggressive style of parenting, Goody had become fearful. I personally hated screaming at the dog but I dutifully followed orders. However, when you are in a face off situation with someone whose teeth are sharper than yours, and doesn’t mind using them – you can’t win. What we needed to do was to parent Goody with love, treats and of course fooling him into doing what we wanted. ( I also prefer guilt as a parenting tool, but find it a little more difficult on a dog, although the word ‘shame’ gets results.)

We had to watch for warning signs. If Goody seemed scared by someone he wasn’t to be forced into a situation with them. In fact, he needed to feel safe and that meant separating him from the person. The trainer also told us that initially we needed to separate any kids from the dog.  Then on adults with whom he was fearful we were told not to have them make eye contact with him. As well, the person was to drop treats as he walked along.

If we wanted Goody to do other things, like get off the couch, again we had to use treats.

A big part though was doing what comes naturally and that was loving Goody. Because in loving Goody, hugging, kissing, fawning over Goody, it made Goody want to be well, ‘Goody’. That part wasn’t hard. In fact, it felt a whole lot better than the screaming. (The neighbours were happier about it too.)

A year later, and another snowy day and there is no more delightful dog in the world. He is friendly, happy, can actually shake hands and roll over.

But that doesn’t mean our guard is down. Occasionally, someone does come to the door, who Goody is fearful of, particularly people who come on too strong, those with white blond hair (?) or people dressed in black (a problem in Toronto because black is of course the ‘cool’ uniform.) It’s not that he will attack, but his ears and tail go down, and he emits a low growl. We know he is scared and we separate everyone immediately.

The mother of the little boy who Goody tried to bite last year, had said to me at the time, “There are no bad dogs, only bad owners.” And at the time it stung. But when I see the enormous change in Goody in the past year, (and yes other people have remarked upon it too,) I hope that by changing the way I am a parent, I have been able to change my dog. (Gee, maybe all of Freud’s stuff about mothers was right.)